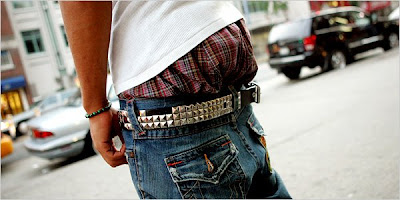 Sorry for the delay, it's hard to keep this thing up while on the day job. Work always gets in the way.

Anyway, I was in the mall the other day and I was waiting in line at a store to try on some clothes. The employee attending to the fitting rooms was wearing fitted levi jeans, however, his boxers were completely exposed. Seeing this horrible lapse of fashion sense lead me to ask:

When did "sagging" your jeans make a come back??

When I was young we used to sag our jeans a little. Occasionally you had someone who would take it too far and have their belt dangling near their knees, but that wasn't too widespread. Also the difference between kids back then (mid 90's) and kids now is that the jeans in the mid 90's were baggy to begin with, so when you sagged them, it didn't look as awkward as it does now. Kids today have seemed to mix the trend of fitting jeans (slim jeans) and sagging your jeans together. This makes for a TERRIBLE combination.

I was speaking to a friend who happend to have a relative recently released from prison. When he saw kids running around with their asses hanging out, he turned to his cousin and said "You know in prison having your ass hang out like that tells the other inmates what your into." (i.e. your a bottom!)
Image Source: NY TIMES