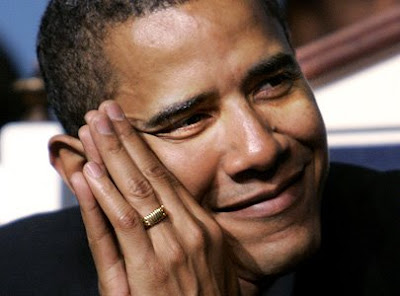 The election of Barack Obama has restored my faith in America. That we are not just a country of gun-toting cowboys, or simple-minded rural blue collar workers or even uppity city folk! That we, as a people, can unite for change. That the Constution still does mean something. And that it is our duty as citizens of this country to question government, and change it when it is not working. Americans excersised that principle yesterday in a way that hasn't been seen since the country was created. Yesterday Americans showed the world that we are more progressive, worldly, aware, and that we too are tired of Bush-Rove-Cheney tyranny.

As a Muslim, I have been scared out of my mind for the Past 7 yrs. It has been unfortunate that my fear has only grown during this election. Claims that Barack Obama is a Muslim should not lead to the question of "Is he really Muslim?" or "How Muslim is he?" or "Does that make him a Terrorist?", it should lead to the question "SO WHAT??". Is being a Muslim in America completely exclude you from holding a public office. I thought this was America?? Where you can do anything you put your mind to. The GOP and media have made being a Muslim a bad word. Like Communist during the Cold War, Jap during WWII, Black during the Civil Rights struggle, or even Witch during colonial times. When did being Muslim confine me to being a second class citizen or someone to be feared. I'm an American! I was born here! I've never bombed anyone, or even hurt anyone.

"Americans" tend to forget that Sept. 11th killed over 3000 people, yet the US Army has murdered at least 5000 civilians in Afghanistan by the end of 2002. A UN issued report dated Sept 20, 2006 stating that Iraqi civilian casualties have been significantly under-reported. Casualties are reported at 50,000 to over 100,000, but may be much higher. Some informed estimates place Iraqi civilian casualities at over 600,000. IS THAT FAIR??? IS THAT WHAT CIVILIZED SOCIETIES DO?? AND YOU CALL ME A TERRORIST??

I pray that the new Obama/Biden admistration will work to quell the violence in Iraq/Afghanistan. I pray that the new administration works to elminiate the culture of a blood-thirsty America. I almost feel like this administration is the last hope for Muslims in America. I fear that there could be a return to Japanese internment camps (similar to Guantanamo Bay), except replace the Japanese with Muslim.

I wept election night.... Not because of the leaps this country has made in race relations, but for the hope of better days ahead, for all of us.