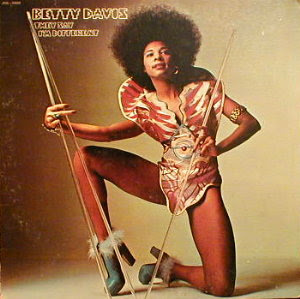 I just recently got my hands on a copy of Betty Davis' "They Say I'm Different" (1974), and she was not lying! I've been meaning to give this LP a listen ever since that article about her in WaxPoetics.
The album is driven by funky guitar riffs and cleaver basslines. Davis' voice is raw and passionate throughout the entire album.
"Betty Davis is the funk," says poet and rapper Saul Williams"It's not just that she's sexy and the music is sexy, but she's just so in the pocket! The notes she chose, the placement, to be able to dance around the music. Man, she killed that shit."
"They Say I'm Different" was ahead of it's time, and may still be.

this is pretty wicked.